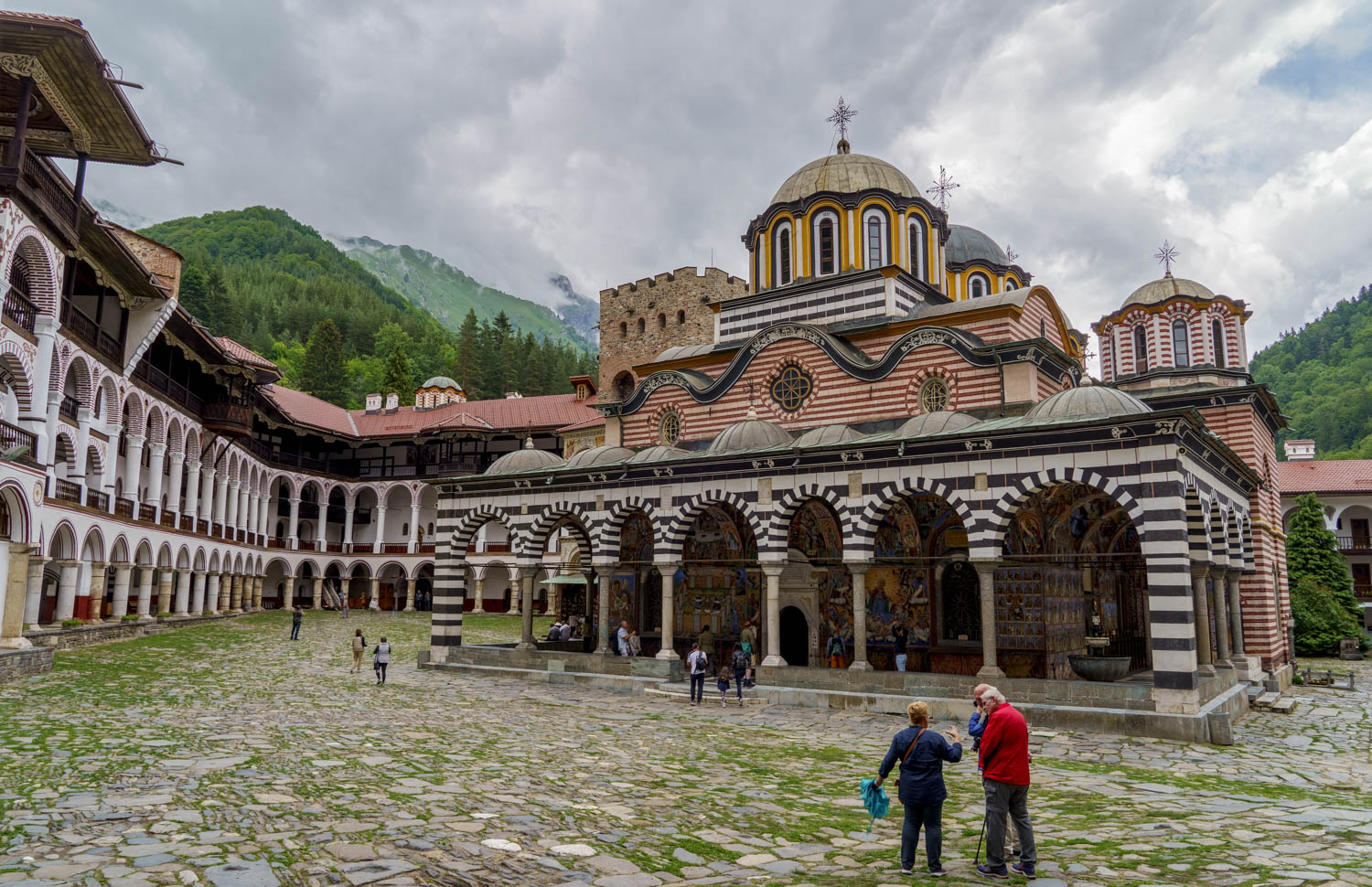 After a 3 hour flight from London we arrived in a warm, but very wet, Sofia. It didn’t help that the mini bus to the hotel leaked with water dripping from the roof on to several seats. However we eventually arrived at our hotel, the Sofia Palace, damp but looking forward to what the next few days had in store

Quickly freshening up it was back out and a short walk to a local restaurant for a late lunch/early dinner and our first chance to sample the local food. Whilst some dishes are meat based, vegetarians would cope well here with many no meat options – so long as you’re ok with cheese as everything seems to come topped with melted cheese!

As we prepared to leave the restaurant the heavens opened with heavy rain and thunder. Waiting for a while to see if it was going to ease up I eventually made the decision to head out (with my trusty umbrella that I always carry on my rucksack) to see a small church I’d spotted on the way to the hotel, the church of St Nicholas the Miracle Maker. Although photography wasn’t allowed inside, the walls and ceiling were decorated in typical orthodox style with frescoes covering every inch.

Leaving the church I wandered a bit further before calling it a day and heading back to the hotel to dry off.

First stop today was Boyana church. Because it was such a small church we had to book an appointment to go and look around inside. From the outside the church kind of looks like a barn however inside in typical orthodox style, the walls and ceilings were covered in the most detailed frescoes. Weirdly you weren’t allowed to take any photos. We also had a time limit on how long we could spend inside with the guide, talking us through the various sections of the church and the frescoes themselves. In fact, he even set a timer so that we would have exactly 15 minutes inside and when our time was up we were ushered outside.

The UNESCO world heritage site of Rila monastery was next on the itinerary. After a short drive further south from Sophia and into the mountains we arrived at the monastery. The setting is beautiful, in the mountains surrounded by forests. The black and white striped walls of the monastery were also quite unique. Once again, we were not allowed to take any pictures inside the church or the monastery. However, this time there were some frescoes on the outside of the building which we did manage to take photographs of.

Finally it was time to head to our last stop for the day, Melnik. Many of the buildings in this smallest of cities in Bulgaria are registered monuments due to their age and history. The city itself only contains two streets which run either side of an empty river bed. Sat on a hill, its not the location for somebody who doesn’t like steps as the hotel was up several flights and walking into and out of the main area meant climbing up and down these.

Today we set off for North Macedonia leaving Bulgaria behind for a short while. Driving across the border posed no issues. After driving a short while further, we entered the carnival city of Strumica where we stopped to stretch our legs and grab some lunch. We had ordered ahead for lunch but when it came the portions were huge and all of us in the group struggled to finish everything.

After lunch it was onwards to Stobi, one of the largest archaeological sites in North Macedonia. Spread over a large area, the site dates to pre-400 BC and contains some well-preserved mosaics.

After a simple and basic breakfast at the winery we were staying at, it was onwards heading south towards Bitola. Here lies another set of Roman ruins , Heraclea. Although smaller in size than Stobi. I think I preferred it as the mosaics were more interesting and the layout of the site seemed more compact and interesting. After visiting the archaeological site it was then a short drive to our stay for the evening at another winery.

Bitola is quite a large town with a very European feel in terms of the buildings and architecture. In the evening we walked around the pedestrian area which was buzzing with lots of people drinking and eating at the outdoor cafes. For dinner. We went to a local restaurant and ended up ordering a variety of national Macedonian dishes. The food kept on coming with baked cheeses, salads and large platters of cooked meat. However, when the bill came the whole meal for nine of us came to just €50.

Following a lovely breakfast we headed to the top of mount palaster for a walk in the National park. The area is full of Molika pines which are endangered and this is one of the few places where they thrive. After the walk (it was great to get a little bit of exercise after all the cheese and meat we’d been eating) we headed to see a local beekeeper. The guy started it as a hobby but now has a large amount of beehives and as well as producing different types of honey products also has an area to treat people with allergies using bee pollen. The rest of the group donned bee suits. However, I stayed to one side as I’m not a huge fan of bees. Beekeeper is clearly running a good business as I’m guessing several tour groups stop for his presentations and after we headed to his house for lunch, which was delicious.

In the afternoon we headed towards Ohrid. First we headed towards Lake prosper and then over the mountains and back down to Lake orrid. The views back down to the lakes as we were crossing the mountains or stunning and provided some good photo opportunities. After checking into our hotel, we wandered through the town, which is far more touristy than any we’ve visited to date, to a local restaurant for our dinner. After ordering it took forever for our food to arrive and it was gone 9.30pm when we finally ate and even then the food was not spectacular with the chicken and pork steaks being very dry and tough.

Following breakfast this morning we went for a walk around the Ohrid old town. First stop was the old Roman amphitheater which sits below the castle perched on top of the hill and flying the Macedonian flag. After a couple more churches we ended up at St. Clements the “postcard” of Ohrid, a church that sits on a short peninsula and is visible as you approach the old town. It’s definitely a case of one of those monuments that looks better from afar than close up. We headed back into town on a boat saving ourselves the walk up and down cobbled streets.

After relaxing at the hotel we took a boat trip further out onto the lake in the afternoon. The catamaran slowly sailed down the coast until we reached the Bay Of Bones, a reconstruction of a prehistoric settlement that was found under the water just off the coast of the lake. After wandering around the reconstruction of the site, the original dates back to Neolithic times, it was back on the boat and we made our way back across the lake.

This evening we headed north east out of Ohrid and into the mountains to a very small, local village. There a local family cooked us one of the most delicious meals we’ve had so far. As usual, it was salads and cheese to start followed by some baked rice with meat and potatoes. This was finished with a homemade strawberry sponge and all accompanied by homemade lemon and nettle cordial.

After our second night at Ohrid (the only location on the trip where we spent 2 nights in the same place!) we were back on the road, heading North to Tetovo. The town contains a very unusual mosque as its brightly painted on the outside and inside. I’ve seen quite a few mosques on my travels but nothing quite like this! The sides of the building seem to have faux-panels painted on them and the interior is richly decorated in yellows and reds.

Leaving Tetovo we headed for a very small mountain village called Varvara for lunch on a terrace by their local church. The view out over the Polog valley was stunning and once again, the home cooked food was delicious. After we’d had our fill it was on to Prizren in Kosovo. We arrived quite late so after a very quick check in at the hotel we had a rushed walk around the old part of the town to view some of the key sites, before going our own way for dinner.

Leaving Kosovo and heading back to Macedonia we first stopped at Gračanica Monastery. Once again it contained amazing frescoes but photography was not allowed. I asked one of the staff why and he gave three reasons, although I suspect the real reason is the final one. First he said, being a UNESCO World Heritage site it was their policy not to allow photography, then he said people using flash did damage the frescoes and finally that they didn’t want people making derogatory images/videos by people opposed to the religion.

Crossing the border once again back into Macedonia we finally arrived a Skopje, the capital. Our hotel was located right next to the old bazaar – a maze of small cobbled streets. Crossing the river you enter the newer part, rebuilt after a devastating earthquake in 1963. The various monuments set around the city are huge in scale, looking like titans frozen in place.

After a night in Skopje it was time for the final leg of our journey, completing the loop back to Sofia in Bulgaria. First stop, just before the Bulgarian border was Osogovo monastery near Kriva Planka. To my joy you were allowed to take photos inside this one, and although the frescoes are relatively new, they were lit with shafts of sunlight coming in through the windows high in the roof.

Back into Bulgaria we arrived in Sofia mid-afternoon. After dropping off our bags we did a quick walking tour of some of the main sites in the city. This was interrupted at one point by a fascist march taking place to object to Gay pride (which was also later that day). After waiting for the idiots to move off – thankfully there weren’t a lot of them – we continued our wanderings, viewing the Alexander Nevsky Cathedral, the old roman ruins under the city, and some of the huge older government buildings.

Finally it was off for our last dinner before packing and flying back the next morning.